Localization Languages: Russian And Ukrainian, Or Why Localize Only Into Figs?

While deciding on the languages for localization is primarily dictated by specific data such as visitor demographics in Google Analytics and is best done by employing SEO specialists from target geographies, there are other important factors that shouldn’t be overlooked.

And while major European languages such as English, German, French, Spanish, and Italian are mainstays of localization, other languages are quickly growing their online presence potentially opening new opportunities for businesses.

In this post, I’ve gathered some points and considerations that should do away with any doubts whether to localize your website or creation into Russian (and Ukrainian, they go hand in hand), or not.

The largest online market in Europe

The Russian Internet, combined with the Ukrainian, is the largest in Europe with over 100 MILLION INTERNET USERS and some 40-60 million gamers (roughly the population of Spain or France, I have seen different estimates). This is not counting countries neighboring Russia, where people speak Russian as a second language (roughly 100 million people)

We don’t buy what we can’t use

A localized product (read your website, software, or game) pays off better in Russian-speaking countries than its non-localized English version. The reason for that being Russian people traditionally have a very limited command of English. In the EF English Proficiency Index Russia is in the yellow, low proficiency sector, nested between Ecuador and Mexico… Only about 7% of the population speak English, and when people claim they do, most likely it is what Americans call Runglish. Hence the desire to use a product with a Russian UI.
This echoes what Jonas Wæver, a creative director at Logic Artists, said in his talk, “It’s not the question of how many people speak the language, but also how many people that would play the game in that language would not play it if it weren’t in that language.” 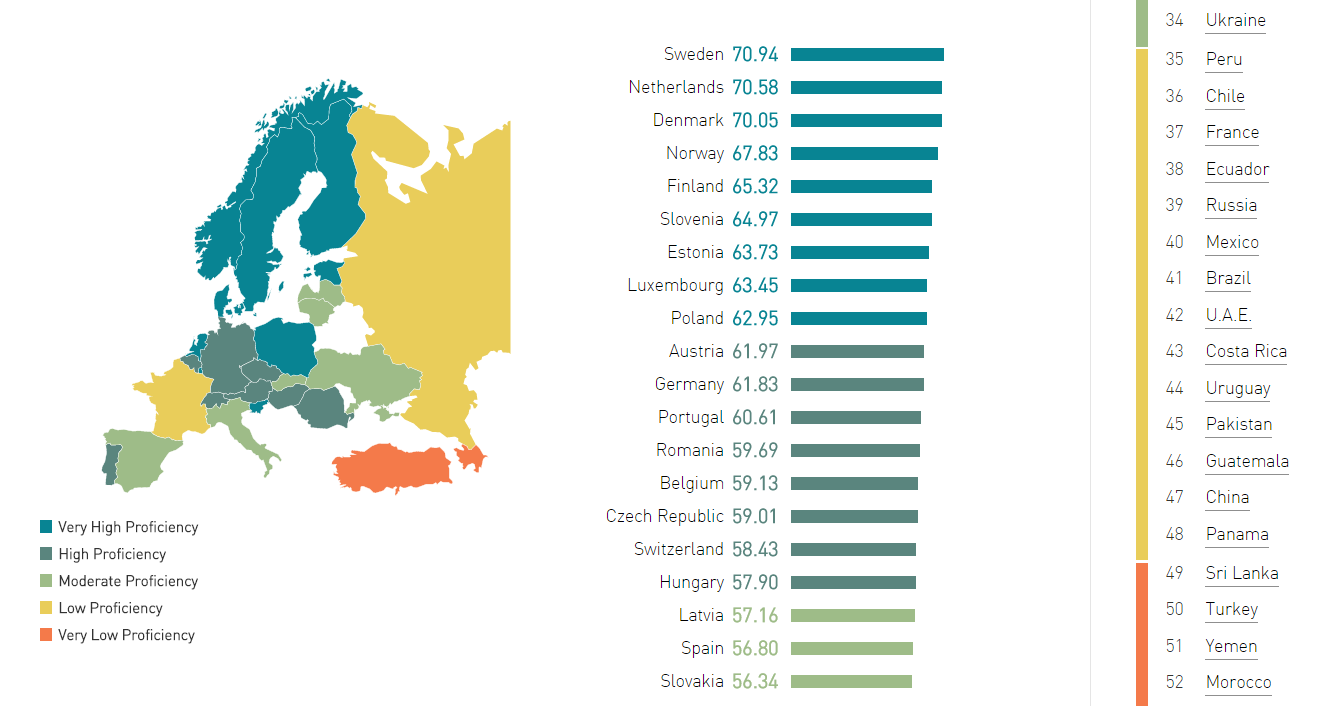 5th largest in the world

M-commerce and gaming are on the rise

Despite the fact that the Russian market is troubled and infamously unstable, people don’t mind spending money on mobile apps and games. Developers from Google say, “Only 38% of the smartphone users in Russia surveyed said they only download free apps. 26% would spend up to 100 RUB and 15% up to 200 RUB.” Gaming apps and m-commerce apps is what that money gets spent on most often

Localization removes the need to seek a pirated version of a product resulting in a lower piracy rate. TinyBuild writes on their website, “The most interesting conclusion though is localisation and its impact … Localising games to Western European languages pays off, and has a very low piracy rate.” The same probably goes for Russian, since its app economy is on the rise, but works the opposite way for Brazil, the article says

Huge Russian user base on Steam

The segment of Russian-speaking users on Steam is the 2nd largest (after English).
Or see the statistics from SteamSpy on the following screenshot:

The choice of many developers

Now, something to consider if you’re a game developer: On Steam, there are almost as many indie games localized into my languages as there are into Spanish.
I’ve conducted my own little research and prepared the chart you can see on the right. I’ve searched Steam directory of games with Indie and Russian+Ukrainian filters applied. Then I’ve done the same for the rest of languages.
I’ve found there are almost as many indie games available in Russian and Ukrainian combined as there are in Spanish (!) and more than in Italian (or if we take only games in Russian and factor out Ukrainian, the picture is still the same). Of course, some games were developed in those languages originally; even if that is the case, the data stays truthful.
If you’re unsure whether to localize your indie game or into which languages, this chart makes it clear that indie developers do have their creations localized pretty often (approximately, 1 out of 5 developers) and they choose Russian and Ukrainian almost as often as Spanish. 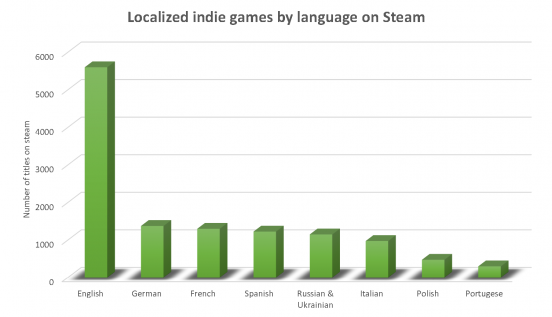 Image: On Steam, games localized into my languages are on the 5th place by the number of titles

In March 2013, the world got the news that now Russian was the second most-used language on the Internet after English. Though Chinese has since taken the 2nd place and Russian moved down to the 6th, that news is still pretty thought-provoking

“Western” is associated with prestige and quality

Decades of the deficit in the 70s-90s reverberate till today in that “inostranniy” product, which means “foreign” or “Western,” is expensive, yet desired. Likewise, Russian mobile users are eager to use foreign apps and play foreign games

360 Security (a Chinese antivirus app, which I have been localizing on and off English into Ukrainian for over a year now) has seen some 12 million installs in Russia over the past year.
A software developer Autocad WS “tripled their user base by getting the localization right.”

When considering localization into most common European languages, Russian and Ukrainian should be on the list and never overlooked. Really, why localize only into FIGS?* (pun intended).